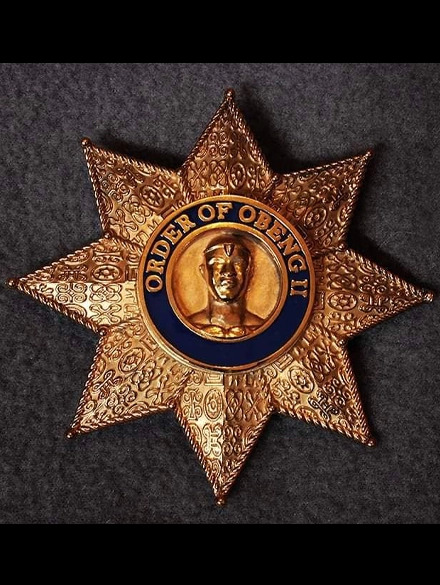 Royal Order of the Obeng II 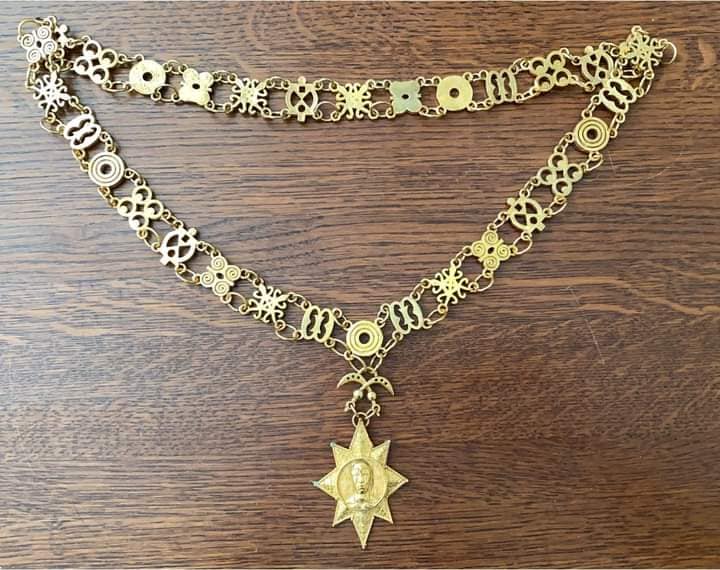 Grand Collar of the Royal Order of Obeng II

Foundation for the Royal Order of Obeng II

“It pays to build a name, the reward doesn't come quickly but it will come however long it may take and it lasts longer. Integrity, discipline, self-control, and fear of God makes a man wealthy, not the size of one’s bank account. Leave a good heritage for your children.” – H.M. Oheneba Nana Kwame Obeng II

His Majesty Oheneba Nana Kwame Obeng II, with the help of the Royal House and Royal Order of the Golden Fire Dog, has done great work for the stool lands and its people in a very short period of time. Under the leadership of His Majesty, in 2019 alone, $14,500 (GH: 75,400) was raised and invested in the People of Sefwi Obeng-Mim. The funds created educational opportunities through the construction of a school, and the support of students and teachers, as well as the construction of a water well, and the purchase of a motorcycle for a visiting nurse. In 2020, His Majesty has outlined further development of the stool lands that will continue to grow the educational opportunities of the people, health care, and sanitation. The Royal family and the Subchiefs of Sefwi Obeng Mim, out of gratefulness for the outstanding work the Chief is doing to help humanities and develop the villages, thus honors the youngest Chief of the Sefwi Obeng Mim Stool Land and as an agent of change by establishing this Royal Order.

The international members of this Royal Order are dedicated to the development of the Stool Land under the care of the His Majesty, the Royal House, and Sefwi Obeng-Mim Traditional Council. Acceptance into the Order is based on the assessment of the human values and quality of character of the applicant, without distinction or discrimination based on religious, social class, race, political tendencies, physical disability, or sexual orientation. Advancement in rank is based on merit.

Name of the Asafo or Royal Order

The name of the Order is the Royal Order of Obeng II (ROOII). As such specified, the Order is a chivalric and international community.

The Fount of Honor

The fount of honor is His Majesty Oheneba Nana Kwame Obeng ll, of an ancient Akan Kingdom, having been nominated, elected, enstooled by the Elders and Kingmakers of Sefwi Obeng-Mim Traditional Area, and recognized by the National House of Chiefs of the Republic of Ghana.

The Royal Order is defined as a noble chivalric international organization. The principal objectives are Charity and the Defense of the Royal House of Sefwi Obeng-Mim, the peoples of the Stool Land, and those of its soil in diaspora. True also to its traditions, the Royal Order upholds the ideals of a free world and the rights of people as defined in the Universal Declaration of the United Nations. The community is made up of individuals who are distinguished by their origin, education, upbringing, capacities, and worthy deeds. While taking an established and indispensable hierarchy into account, the Royal Order adopts the principle of social equality of all its members.

Motto of the Order

Seat of the Order

The seat of the Order is the Royal House is Sefwi Obeng-Mim, under the Wiawso Traditional Area, Western North Region of the Republic of Ghana; with Magistral and Administrative Seats as decreed by the Grand Master.

The Privy Council shall be members the Royal Order of the Golden Fire Dog’s Grand Magistracy appointed by the Grand Master to advise him when so requested. Ordinarily, the Privy Council is composed of the Nkosuohene, Obahemaa, Adontehen, Nkyiodmhene, and an Asafohene.

Membership of the Order

The Royal Order of Obeng II (ROOII) is designed as a dynastic order reflecting the traditional African royal military order or Asafo, differentiating it clearly from European models. The membership of this Order is restricted to the Chief of Sefwi Obeng-Mim and the very few other persons who have honored the Chief and Sefwi Obeng-Mim through their noble acts of love and charity that build up the Traditional Area and its legacy for future generations.

The Grand Master, on recommendation and advisement of the Privy Council, creates an honor list. From the list, candidates will be invited to petition or ask if they will receive the honor (in the cases of Grand Collar to nobles, royals, and heads of states, etc.).

Acceptance into the Order is based on the assessment of the human values and quality of character of the applicant, without distinction or discrimination based on religious, social class, race, political tendencies, physical disability, or sexual orientation.

I. The following are among the desired qualifications for membership in the Order:

II. The following are impediments for attaining membership

Honorarium Passage Fees are subject to annual revision based upon the recommendation of the Privy Council in accordance with the Constitution of the Royal Order. This suggested fee giving in thanksgiving is used to support the works of the Oheneba Foundation and Royal House of Sefwi Obeng-Mim. In extraordinary cases of need, the fee may be waived at the discretion of the Grand Master. Advancement within The Royal Order is based upon merit and the individual's activities within the Order, not through monetary donation, contingent only upon the recommendation of the Privy Council.

Knights and Dame of this Royal Order shall make a thanksgiving offering annually (aseda) on the anniversary of the enstoolment of Chief Oheneba Nana Kwame Obeng II. Minimum suggested donation will be set by the Privy Council and communicated to all members by the Adontehene.

Section 4: The Ranks of the Royal Order

The Chief of Sefwi Obeng-Mim is the Grand Master of the Royal Order and grants the noble dignity of the Order to others found to be of merit by His Majesty and the Royal House. Other than the rank of Grand Master, which only the Chief holds, there are two ranks of membership.

The following, by Letters Patent and Brevet, are granted as a non-hereditary title and honor.

Nobility is conferred upon the grantee under the traditional customs of Sefwi Obeng-Mim.

Adehye Akofo or Royal Knight/Dame, Grand Collar (GCO) - Royal honor bestowed to other recognized heads and members of royal houses, nobles, and heads of state, as well as a lifetime achievement to a member of the Royal Order of the Golden Fire Dog. A recipient of the Grand Collar is treated like an adopted family member of the Royal House and is a companion of His Majesty.

Section 5: Style, Title, and Address of the Grand Knight or Grand Dame

The title and honor shall be issued by Letters Patent. Rank shall be assigned by a Brevet. These are issued by the Grand Master through the Chancellery of the Royal Orders.

Each member bears the traditional title and honor of Onuonyamfo, which may be translated from Twi as "noble," "most excellent," and is also used when translating the British knight title of "Sir" into Twi. All members of the ROOII are entitled to the style of “The Most Excellence” with the appropriate postnominals. The Grand Collar is bestowed the additional title and honor of Adehye Akofo, Royal Knight.

If the Letters Patent or Brevet for a particular recipient contains a different style, title, and address than the above, the Letters Patent or Brevet will triumph only for that particular recipient. The Adontehene and the Chancellery may provide guidance on application of style, title, and address as needed.

At request, the title may be granted as an “honorary” title and so issued in letters of patent.

His Majesty, by his own right and prerogative, as well as on recommendation by the Royal House or the   Sefwi Oebng-Mim Traditional Council, may remove a knighthood, damehood, or any other honors bestowed.

By the right and privileges conferred through Letters Patent, the noble Knights and Dames of the ROOII have a Royal Warrant to use particular heraldic devices related to this Order and the Royal House. A heraldry guide will be provided by the Adontehene.

As the custom of other Royal Houses around the world, member shall submit a copy of their arms to the Adontehene, as Chief of Arms, for review if they seek to adopt the particular heraldry devices related to the Royal House or Orders. With approval, the achievement will be registered on the Royal House’s Roll of Arms, which may be published and public.

With the Knight or Dame’s achievement recorded by the Adontehene, they may register their arms with the Heraldry Society of Africa, the international Armorial Registry, or any registries.

AWARDS OF THE ROYAL ORDER OF OBENG II

Knight or Dame of the Banner Award

The Akan warriors are fierce fighters. The warrior that stands beside the Warlord and protects the Royal flag is the Frankaahene/Frankaahemaa (“chief of the flag bearers”). They are the “unshakeable army of the hills.”

Honoring and remembering this Akan tradition, H.M. may bestow a similar dignity and honor as a meritorious award for one’s achievements and service to the Royal House and the people of Sefwi Obeng-Mim.

The award is granted to those in the dynastic Royal Order of Obeng II and bearing the rank of Grand Collar.

The award is composed of an inheritable Title and Honor similar to a British baronet/baronetess, and the Royal Knight or Dame shall name their heir whatsoever.

Each member is entitled to bear in their heraldic achievement an Asafo banner of their own design, per the Royal House’s Heraldry Guide provided by the Chancellery, as well as the Golden Fire Dog in their coats of arms either in canton or an escutcheon at their election.

They may enjoy the post-nominals “Bt./Btss.” followed by “GCO” and other post-nominals of Royal Orders and rank of this Royal House. They may also use, “1st Baronet/Baronetess [surname] of Obeng II” (for example, 1st Baronet Boyd of Obeng II).

On request of the Royal Knight or Dame, and at the prerogative of H.M., the title and honor may be bestowed to the honoree’s legal spouse which is held for life (non-inheritable).

The Royal Knight or Dame may directly petition H.M. through the Chancellery for their heir whatsoever who are over the age of 21 years to be admitted, after submitting the appropriate passage fee, as a Knight/Dame Grand Cross of the Royal Order of the Golden Fire Dog. Thereafter, the heir may bear the inherited award as long as they continue to remain active in the work of the Royal Orders. The inherited post-nominal, like British Baronetage, after the original awardee shall be numeric and surname of the original awardee (i.e. 2nd Bt. Boyd of Obeng II).

His Majesty, by his own right and prerogative, as well as on recommendation by the Royal House or the Sefwi Obeng-Mim Traditional Council, may remove the title and honor.